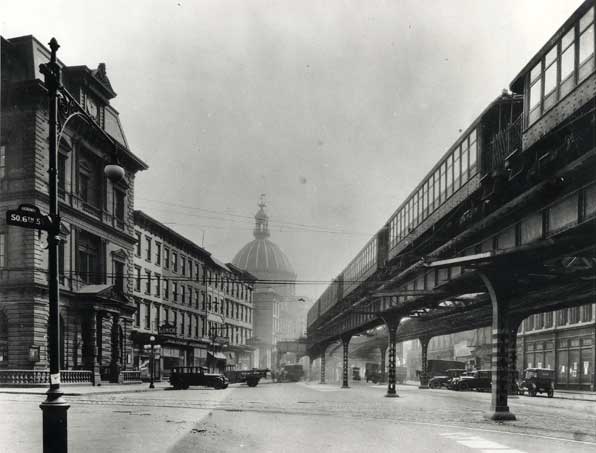 The Kings County Savings Bank building, built in 1867, is on the National Register of Historic Places and was the seventh building to be landmarked in New York City. The location of the building is one of New York’s most historically significant areas and an economic development

zone. Williamsburg is now also New York’s largest art community with over 10,000 writers, artists, and performers, many of whom

are in some of the foremost galleries in New York City, or perform in major New York Institutions, or write for major magazines and papers worldwide.

The WAH Center is open to the public for our art exhibits and cultural events. Every year thousands of people pass through our doors. They generally admire the historic structure and note its aged and decayed appearance. The local community expresses great hope and anticipation in the restoration of this beautiful building. The WAH Center is also a vital participant in community life. Early on, we had an exhibit of the original architectural plans of famous Brooklyn landmarks such as Prospect Park, Greenwood Cemetery Chapel, the Botanical Garden, The Brooklyn Academy of Music, etc. to announce our project. We have hosted community meetings with Community Board One, and in the past have held two meetings to discuss a proposed Waste disposal site near us ( which we oppose since the recreational tourist use of the property in question will bring more tourist dollars to the state and city and will improve quality of life in this hereto fore depressed neighborhood). Ken Adams, President of the Chamber of Commerce visited us to talk about our needs, and the Borough President sent a five person delegation in 1997 to talk about our project. And our new borough president Marty Markowitz made it one of his earliest priorities to visit our site and discuss our needs. Among continuing efforts to make the public aware of our needs, we also had a petition signed a couple of years ago which was sent on to the NYS Department of Parks and Recreation. Also, we now host a Williamsburg Arts & Culture Festival which will take place again this Fall. At all events we talk about the importance of our building to the community and we do tours of the building for interested individuals and groups several times a year.

The project, the Kings County Savings Bank Building, was built to be a savings bank in 1867, and it remained used as a bank until about 17 years ago. Subsequently it was occupied by artists, and now by the Williamsburg Art & Historical Center (WAH Center), a much needed facility in a burgeoning art community with no large public exhibit, rehearsal and performance space other than the Center. This arts center is one of the most important new art centers in the city which has achieved international recognition over six short years with articles being written about it in papers in Japan, Germany, Italy, France, Pakistan and many other countries. There has also been much television coverage. An Austrian TV program covered the art scene in New York City, stopping at the Guggenheim, the Whitney, a few other notable galleries’ and then the Williamsburg Art & Historical Center at the Kings County Savings Bank Building. The building, in other words, is receiving great international press because of the WAH Center and needs to represent New York with good face to the international tourist public in order to show that New York cares about its great architectural & artistic treasures. We are serving the local community with diverse cultural programming. The building and the art center are vital resources for the city & state, and the building’s restoration is essential.

We intend to totally renovate the exterior of the building in order to preserve this historically significant structure for posterity. This building, an architectural masterpiece, was built at a time when Williamsburg possessed a significant percentage of America’s wealth. The Havermeyer sugar barons monopolized the world market. Ships were built in our deep harbors. The Fiskes and the Vanderbilts had mansions on our river shore overlooking Manhattan. And Astral Oil (later Standard Oil) had headquarters here. This bank building was pivotal in the financial life of, not only New York, but America as well.

We have a fine committee composed of Craig Morrison, a noted restoration architect, Shoji Sadao, Director of the Isamu Noguchi Foundation, Barbara Skarbinski, Director of Design & Review with the Department of Housing Preservation in New York City, and Professor Brent Porter of Pratt Institute. We will be documenting the project with photographs and video, a service provided free by our local professionals. And we are researching the history of the area, with historian John Derezewski as part of our project. At this time Craig Morrison has completed the schematic plan for the restoration and the clock tower.

We are pleased to note that we are helping to fulfill the objectives in the New York State Historic Preservation Plan (pages 23 & 24) by “promoting preservation as a catalyst for economic development and tourism,” and by “integrating historic preservation into the planning process through close coordination among federal, state, regional and municipal agencies,” and by “fostering pride in community.”

The project is one of the finest historical properties in New York. It is in immediate threat from lack of maintenance over the years. It serves a distressed under served community of residents with its public programs. Historic restoration will enhance the cultural/social revitalization of the community and help develop it economically.

The area of Williamsburg had up to a few years ago been one of the highest in crime and poverty in Brooklyn. Since the artists have moved in to find inexpensive living space and large work space in loft buildings, the neighborhood, with a very diverse population of Latinos, Polish, Hasidic, Italian, etc., has stabilized and improved. The building and the Center serve as a cultural resource for the community which it would not otherwise have with a wide range of programs in art, music, history, film, computer arts, design, poetry, literature, etc.

With the artists, new local businesses have opened up: design studios, film production studios (we are New York City’s second largest film production area), restaurants, and shops. Also, local galleries have achieved international fame, attracting tourists from around the region and around the world. There are now over sixty galleries in the area. Tourists are spending money which is helping the community to improve the condition of housing and reduces poverty. Everyone is benefiting by the activities in this building which shows more art than all of the other galleries in the area combined. The impact of the project is all totally positive. It will bring jobs for the restoration itself. It will bring tourists to see the magnificently restored building. Tourist dollars will have a major impact of the quality of life in the community. It will foster great community pride for the city, state and country.

We encourage the community of New York to help in any way to raise additional funds for this great project. Your support will be very much appreciated!