More than 120 works by nearly 70 artists

Since late 1996 when the WAH Center opened, we have been acquiring contemporary works for a collection. While most of the works in the collection are from wonderful exhibitions held at the WAH Center, some works in the collection were not exhibited at the center, but donated by our generous friends. And while many works are from artists in New York City, we also have works by artists from across the United States and abroad.  In one or two cases we have acquired work from an artist in depth, which we can show at special times. And, on particular themes such as last years, “Paradise Lost,” we have a very good body of art that can be shown again at special occasions.

We are most thankful to have received many works donated by generous artists, and we are especially delighted and honored to have works by some particularly outstanding artists who are highly respected in the art world, such as Ilya Bolotowsky, Judy Chicago, Yayoi Kusama, Faith Ringgold, Jerry Rudquist, Toshiko Takaezu, Ansei and Toshiko Uchima, Chuyu Uemae, (a member of the Japanese avant-garde “Gutai” group) and, and more. For the most part, however, they are working professionals of high talent some of whom have been already recognized, having wide exposure in the New York Art World and beyond, and some of whom we feel will be known in future years. We are following their progress with great interest.

We hope that you will come to see Part 1 of the contemporary art show in October and Part 2 in November, followed by the old master collection in December.

Artists in the Show: 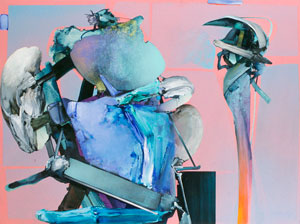 "Head and Figure/Blue Surprise, 30" x 40", acrylic on rag board by Jerry Rudquist 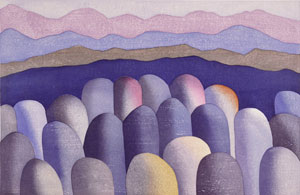